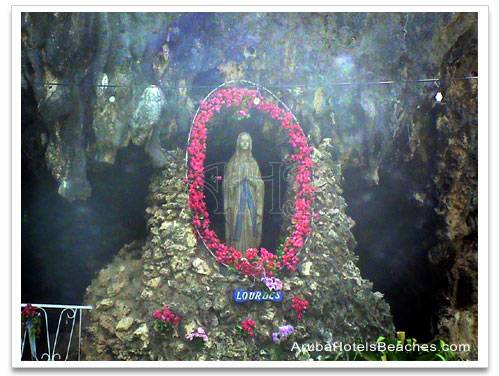 The Lourdes Grotto Aruba can be found in Seroe Preto near San Nicolas which is in the southern area of Aruba. This is a Catholic religious site where you will find a statue of the Blessed Virgin Mary that was placed into the rocks in 1958 by a priest and his Catholic parishioners to mark the 150th anniversary of the first apparition in Lourdes, France.

The Lourdes Grotto Aruba is named after the area in France where a 14 year old peasant girl named Bernadette, from Lourdes, France saw an apparition of what she called “a beautiful lady”. From February 11, 1858 to July 16, 1858 this apparition appeared to Bernadette 18 times.

After telling her mother what she had seen, Bernadette’s mother forbid her to go back to the grotto after hearing that her sister and her friend who were with her at the time did not see the apparition.

Bernadette said “the beautiful lady” asked her to return to the grotto. After a few days her mother gave her permission. Word was getting around about Bernadette’s apparitions and other people started coming to the grotto to pray.

At the Our Lady of Lourdes site in France, a spring appeared after “the lady” told Bernadette to dig in the ground and drink from the spring. This site became a holy spot where people came to pray and be cured. There were many reports of miracle healings.

On the day the 16th apparition appeared to Bernadette she was told “I am the Immaculate Conception”.

In 1860 the Church issued an investigation and declared the Virgin Mary did appear to Bernadette Soubirous. Pope Pius XI canonized her and she was declared to be “Saint Bernadette”.

Every February 11th, there is a procession of Catholic worshippers that travel from St.Theresita’s Church in San Nicolas to the Lourdes Grotto Aruba to celebrate a mass at this religious site. 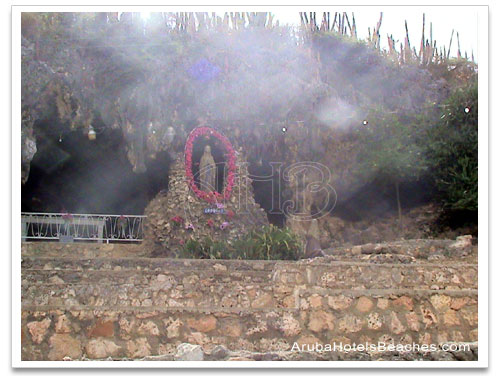 If you look close at the photo above you will see a small statue of Bernadette kneeling and praying in front of the Blessed Virgin Mary.

The Lourdes Grotto Aruba is a lovely, quiet and peaceful area to visit. It does not have a spring with “miraculous healing powers” like the grotto in France, but it is just as lovely. There is a grotto across from this one where there is an additional area for reflection or worship. You may notice a bunch of parakeets that seem to call this place their home.

As a little catholic girl growing up in Brooklyn, I loved the story of St. Bernadette and choose her name to be my confirmation name. To some visitors this may be a very simple site they may want to pass up but to others like myself, it’s worth the visit. 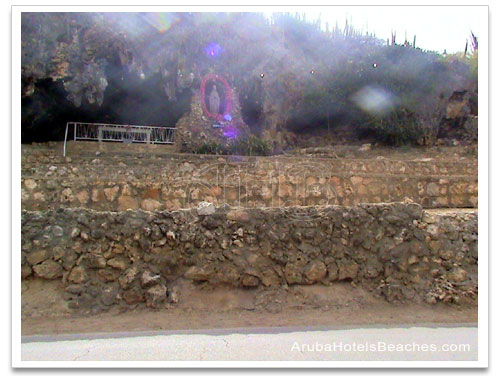 After visiting this site you may want to see the Alto Vista Chapel. 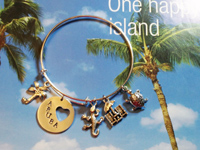